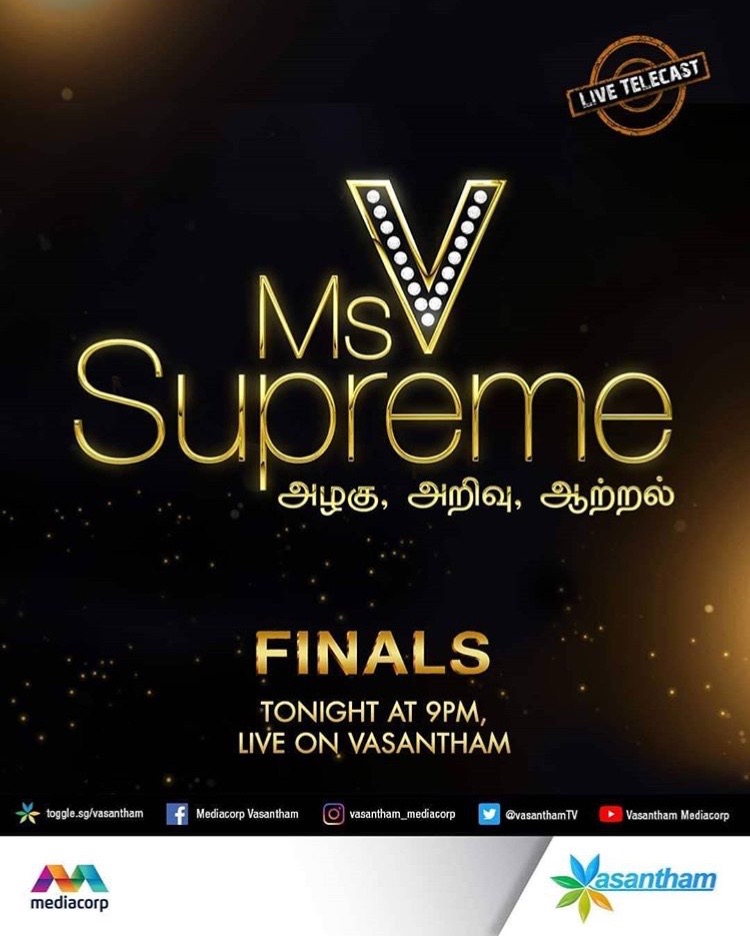 How has time whizzed by so quickly??

On Monday the 25th we found out who would be crowned 2019’s Ms V Supreme, and it was down to these three finalists  – Aarthi, Haleema and Devika. I got to interview the girls before the semi finals and you can check out their interviews Here.

The girls made some time for me over the weekend and we got chatting on Instagram Live.

Aside from the fun banter during the chats I asked them 3 pertinent questions:

How are you feeling this close to the grand finale?

How do you think you have grown from the beginning of the show until now?

What expectations do you have going into the finale?

So let’s check out what they had to say!

“I am definitely very nervous. We’re all prepping for it, we’re just going to give it our best shot! We were in rehearsal this afternoon and the entire group of girls have come together for group rehearsals as well!”

“There has been so much growth! First off, I have brushed up on my Tamil – I learnt Chinese in school – and I love that I get to embrace my roots. Definitely have developed more confidence and I am able to speak my mind with less hesitation”

“Of course my biggest expectation is to win the competition! I have been working very hard from Day 1 plus the sacrifices I have made, would make my winning this much more satisfying.”

“My growth has been tremendous! I came into the competition only with experience with hosting but through the tasks given on the show, have tried my hand at acting, doing the catwalk, dancing – among other things – so it has really helped me grow. It’s not simply about proficiency in Tamil and being well spoken. ”

” It is an honour to share the stage with Aarthi and Devika. I cannot wait to slay the stage on the finale with them!”

“I just want to give it my best, without disappointing myself. Coming this far means a lot to me, the stakes are really high. Honest talk: I’m feeling unwell with a migraine so I am trying my best to stay motivated and not let it bother my frame of mind too much. Hoping to get some time tomorrow to prepare even more for the Finals”

“I’m feeling oddly calm and I guess it’s because most of the competition has already been done and I am just going to do my best for the last lap. I had my freak out moment 3 weeks ago! Now that it is closer to the date and I have an idea of what’s in store for the finals, it doesn’t feel as scary. Also, doing this with Aarthi and Haleema helps – we’re in the same boat!”

“I have gained so much more than exposure from this. I have gained a sisterhood, friendships and perspective. It has been wonderful. This has made me a better person, helping me to evaluate the way I thought about myself, about competing and learning to be more open about my thoughts with my fellow contestants. As an advocate for sexual violence awareness, it emphasised that I need to practice what I preached”

“Much like what Haleema said, I expect myself to do my best. It has been quite the journey, having come this far. It is a privilege and responsibility to be in the Finals and to honour that, I just want to do the best that I can!”

Before we knew it, the weekend passed in a blur and Monday arrived, with so much excitement in the air!

I started off the day with a morning visit to meet the finalists in person, while they were rehearsing their respective skits for the evening with the rest of the Ms V Supreme family – former contestants who gamely joined the finale to help the finalists during their final tasks for the competition. That too, in front of a live audience for the first time!

After completing a quick live video to see how Aarthi, Devika and Haleema were faring, I took a gander at the main stage of the programme.

All recharged for the evening, I got ready and headed back to MediaCorp studios to meet the finalists again and interview the judges.

This time round, the anxiety was palpable with the girls. They were in the midst of getting their hair and makeup done, it was unusually quieter than their usual banter. The reality of being so close to being crowned was setting in. The other contestants were there in support and anticipation as well and they were dressed up to be part of the skits the three finalists had prepared. 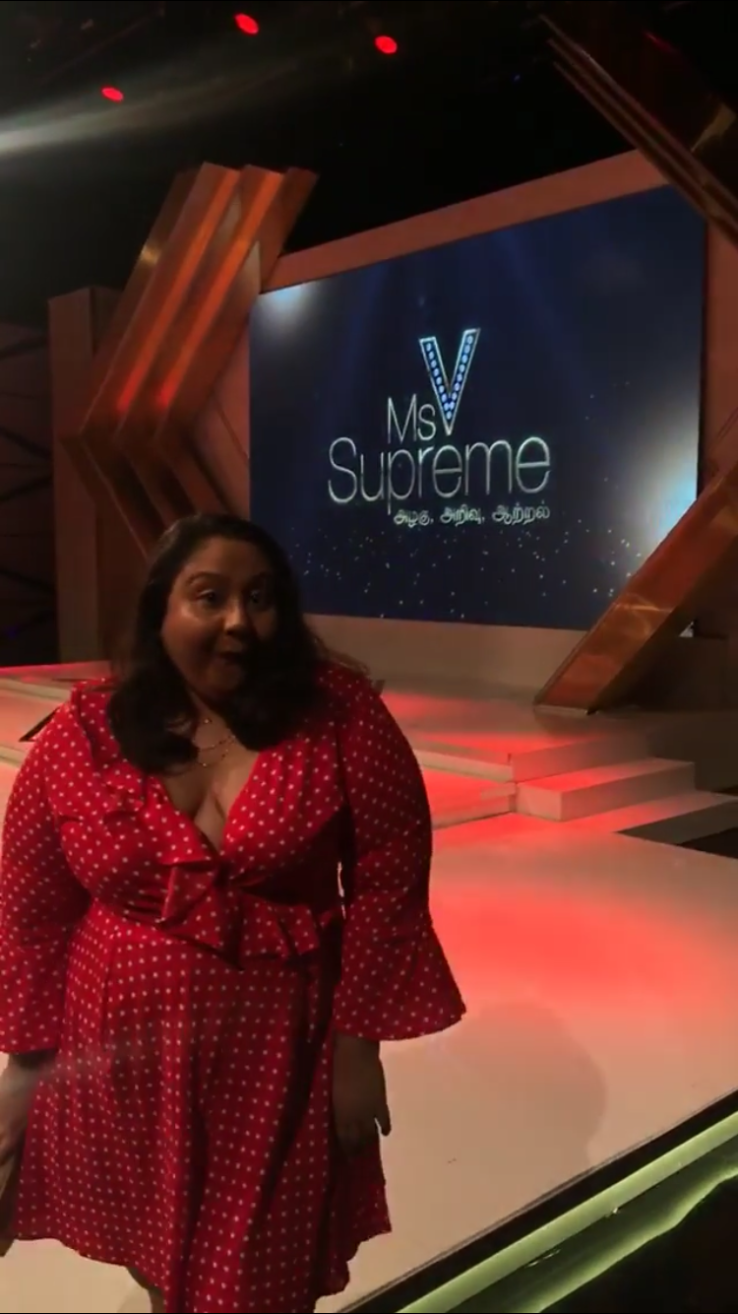 During my interview with the judges Indra, Bharathi and Udaya, I asked them how their expectations differ today in comparison to the very beginning of the competition as well as what the audience watching from home should come to expect.

Unanimously, they expressed a great amount of hope and excitement for the girls, who have been preparing and working so hard for Ms V over the past 6 months. Which ties in to what the audience were to expect – a culmination of the finalists’ hard work showcased in the final tasks before announcing the winner of the show.

As we took our seats for the finale, I watched supporters of the three finalists get prepared to showcase their banners in support of their loved one. Their friends and family were there giving their full support.

We were hyped up before the show started with some help from local tv host and actor Elamaran Jr who definitely helped diffuse any tension by making us laugh the entire time, while briefing us on ‘live tv show audience etiquette’.

Lights, Camera, Action and the show began once the girls stood on stage! After the re-introduction of the girls and the host of the show Jaynesh entered the foray, we were treated to the individual acting skits by the finalists that included former contestants. That was followed by the judges comments on how they fared in the task.

Next up was a talent round that took me by surprise :O

Aarthi started off with singing in both Tamil & Chinese followed by Devika performing ventriloquism and Haleema performing a stand up comedy set. Totally unexpected and very refreshing.

Since this was a live tv show, I was surprised with how quickly time passed, how time was allocated for ad breaks and for prep in between the tasks like changing props on set etc.

To say it was nerve wrecking to wait for Jaynesh to announce the winner at the end would be quite the understatement. Friends and family of the finalists were making it known who they wanted to wear the crown.

I felt so much emotion because I knew how badly each of these girls wanted to prove their might in the competition:

Aarthi, the unassuming and young ingenue who worked through finessing her Tamil and growing into a young star…

Haleema, discovering that while hosting was a no-brainer for her thanks to her experience in the field, was adept at other aspects of what it took to win

Devika, who entered the show with no expectations to begin with, the gumption and amazing dance abilities to showcase as a bonafide personality ..

Tears of joy from beloved supporters in the crowd as Devika was crowned winner! A well deserved win for a woman with so much passion, dedication to her craft and enthusiasm!

And while Aarthi and Haleema did not win the crown, they won our hearts. I have so much respect and awe for the effort, sacrifices given to pursuing their dream. Well worth worth the blood, sweat and tears.

Like the contestants, I was not sure what to expect when I decided to be a part of the Ms V Supreme world. This was so out of my scope of work for the blog and I feared if I could take it on. I was cautiously excited to be part of a local initiative since support for my work in the local community has not been the best. Some view me and my body of work with disregard or disdain.

This was about so much more than about the competition itself.

Finding kindred spirits, working through my social anxiety to bring my own confidence forward to the foray. Pushing past fears surrounding my mobility and self esteem since the injuries. Feeling more connected to my people here in Singapore, especially the Indian community. Moving past fearing the backlash I thought would come my way as a big girl from said community.

Taking leaps of faith. Just like the girls and the entire crew did for the new and improved Ms V Supreme.

I truly hope you have enjoyed reading my posts about the show as much as I have enjoyed covering it. There is so much more in store for the blog and I look forward to sharing those moments with you 🙂

Sending you so much hearty Aarti love xxxo 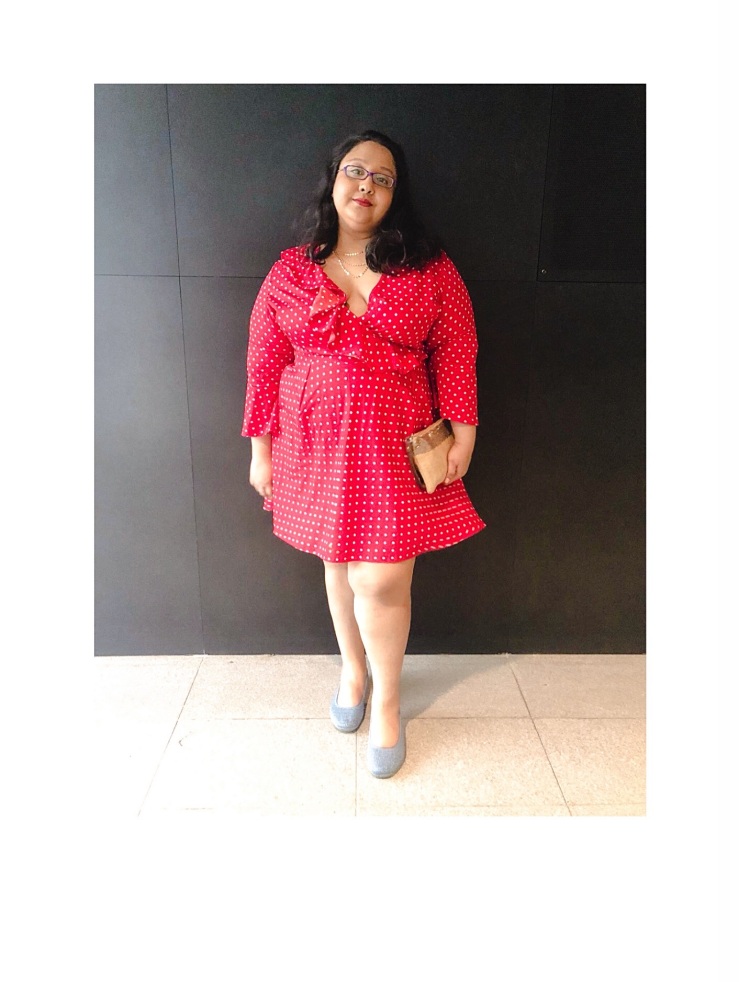 plus sized Indian lass from Singapore, who champions fat body positivity and intersectional feminism. Also an advocate for mental health, living with chronic illness, chronic pain and invisible disabilities. Does chat about a variety of other important topics from time to time. View all posts by Aarti Olivia Dubey

If you would like to work with me, drop me an email at ollievanter29@gmail.com

Curves Become Her on IG

My Life In Blog

The Story Of A Guy With Too Much Time On His Hands.

Understanding ourselves and the world we live in.

Musings of a Nerdy Indian

because brown girls are fangirls too

Im young Plus Size and Dont feel bad about it

Welcome to your new home on WordPress.com

This will be a place under construction, just like me. Expect long delays.

Pretty, Plus and Proud